An introduction to snow kiting in Switzerland 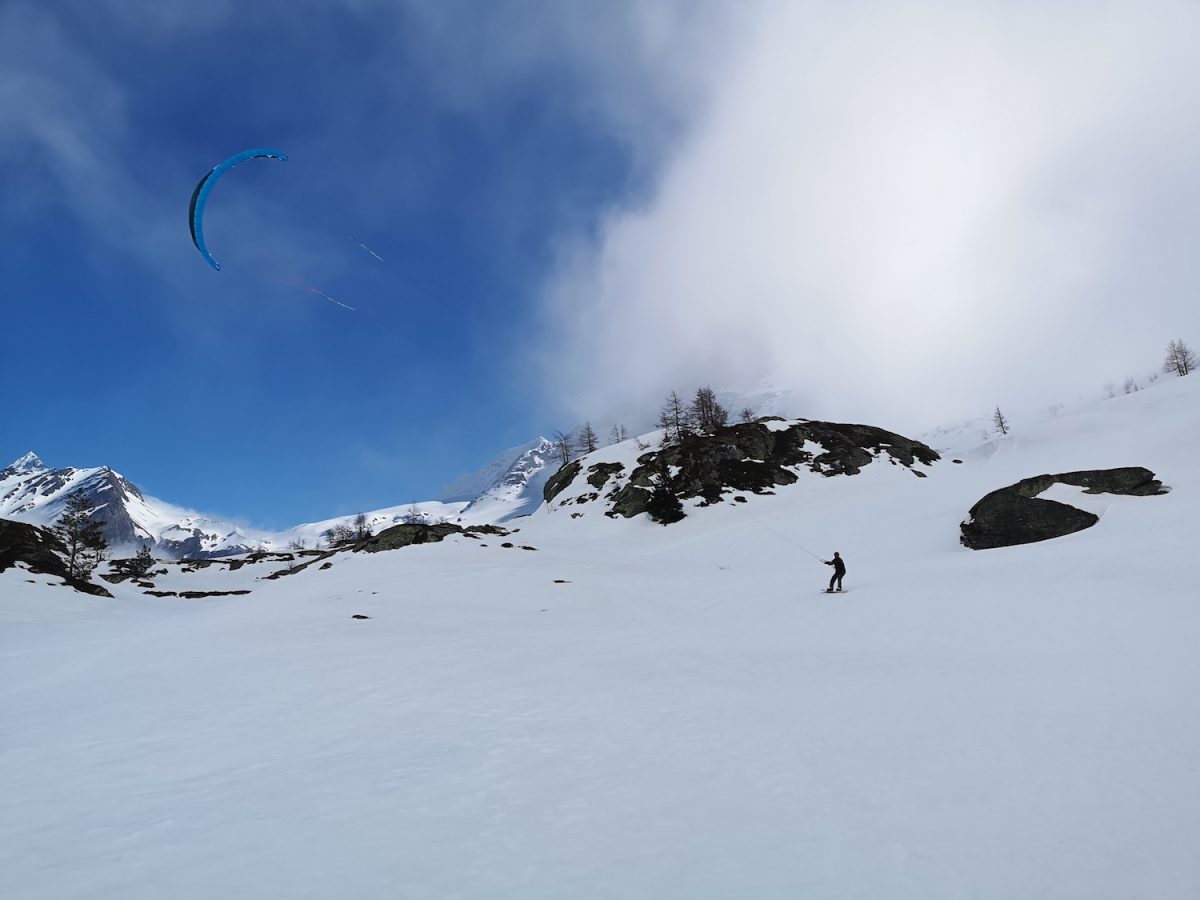 An introduction to snow kiting in Switzerland

It was an unseasonably warm week in winter. The snow was layered thick on the Swiss Alps in early March but the sunny daytime temperature was already pushing 14 degrees Celsius. However, that all changed as we ventured up the Simplon Pass.

Navigating the hairpin bends of the pass was a gloriously terrifying experience. Ice-like cliffs rose up above and below us and as we began our ascent into the mountains a cold wind permeated through our bones, causing us to quickly close our open windows.

However, the icy wind was greeted with smiles as we knew that good wind meant snowkiting was just moments away.

My husband is an avid snowboarder and myself an avid skier, and we are both beginner kitesurfers and firm adventure-junkies. So we knew after watching our first Red Bull Ragnarok video that snowkiting was one of those things we simply had to try. When I stumbled across Pascal from the Swiss Snowkiting School, I immediately set about planning a trip to the quaint town of Brig at the base of the Simplon Pass where our snow kite adventure would begin. 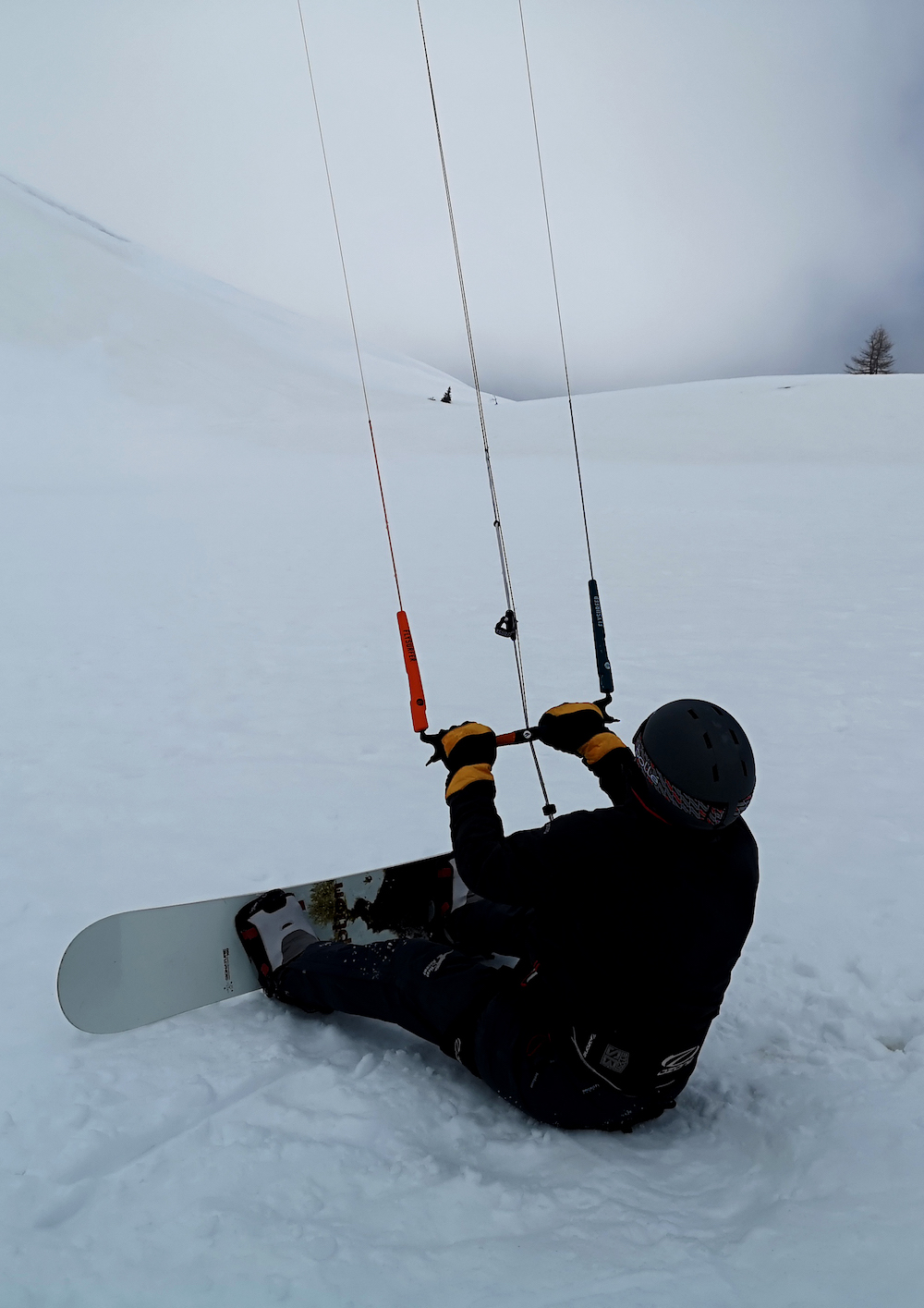 Knowing how to ski and snowboard already and having done the necessary lessons learning how to land, launch, and fly a kite we already at an advantage for snowkiting. I would imagine this would be a tricky sport to master if you hadn’t participated in any of these sports previously.

The kite, which resembled a training kite, required minimal effort to get going and no backbreaking pumping was required. In fact, in the building pre-blizzard conditions, much snow had to be heaped on top of the tiny kite in order to avoid it flying off down the pass. 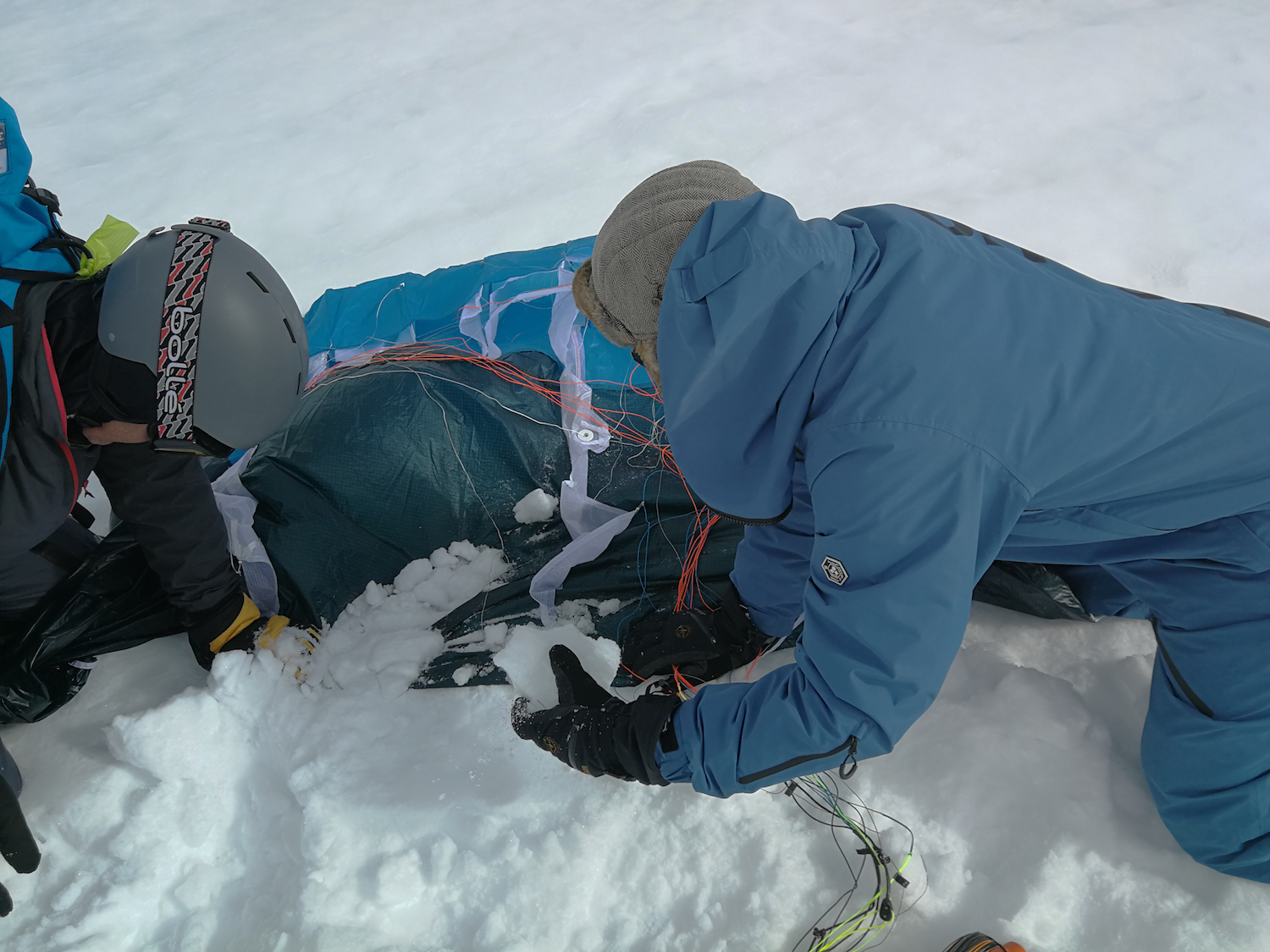 My husband was the first to give it a go and within seconds he was up and off. With no water friction to weigh you down and not having to master the art of standing up (as you get going from an already upright position), the transition from on the water kiting to sliding along on the snow was pretty simple. The little kite needed only the slightest of movements to push for power and the wide-open space of land that Pascal had taken us to meant there wasn’t much to worry about in the way of obstacles.

Nevertheless, watching my hubby flit around at some 2000 metres above sea level near the top on one of the Alp’s highest passes, a cold stone of dread was growing in my stomach. As my phone which I was using to capture the action shut down due to the freezing temperature, I started to wonder what on earth I had got myself into.

However, upon stepping into my skis and launching the kite, I was surprised to discover that I too could master this crazy sport with minimal effort. The kite, being as small as it was, proved to be the perfect choice for us novices and was super easy to control, depower and even relaunch on the odd occasion that I sent it for a nosedive straight into the snow.

The only thing I struggled with on my skis, that I assume would have been easier on the snowboard, being closer to a twin tip kiteboard, was mastering the art of slowing down. Now that I was going, I was struggling to stop and had mental flashes of my little pink helmet with my flailing limbs attached, careening down the side of the Alps and over into Italy. My awkward attempts to snowplow as I tried to reduce speed must have looked pretty hilarious from where Pascal and hubby were standing.

I finally figured out that I needed to edge upwind just as I would on a kiteboard, however with the skis pointed perpendicular to the kite, this was easier said than done.

Nevertheless, I got in the end, but feeling pretty drained, cold, and mentally exhausted I was happy to take a rest in order for hubby to fly around in the snow once more.

Upon returning to Pascal’s centre to dethaw a myriad of DIY-snowkiters had shown up on the flat stretch of pass to give snowkiting a go. However, Pascal looked none too happy about this idea, having had to rescue many a daredevil in the past who had used their too big traditional kite on the snow and ended up bursting bladders or getting into trouble. Note to self, always learn to snowkite with a professional! 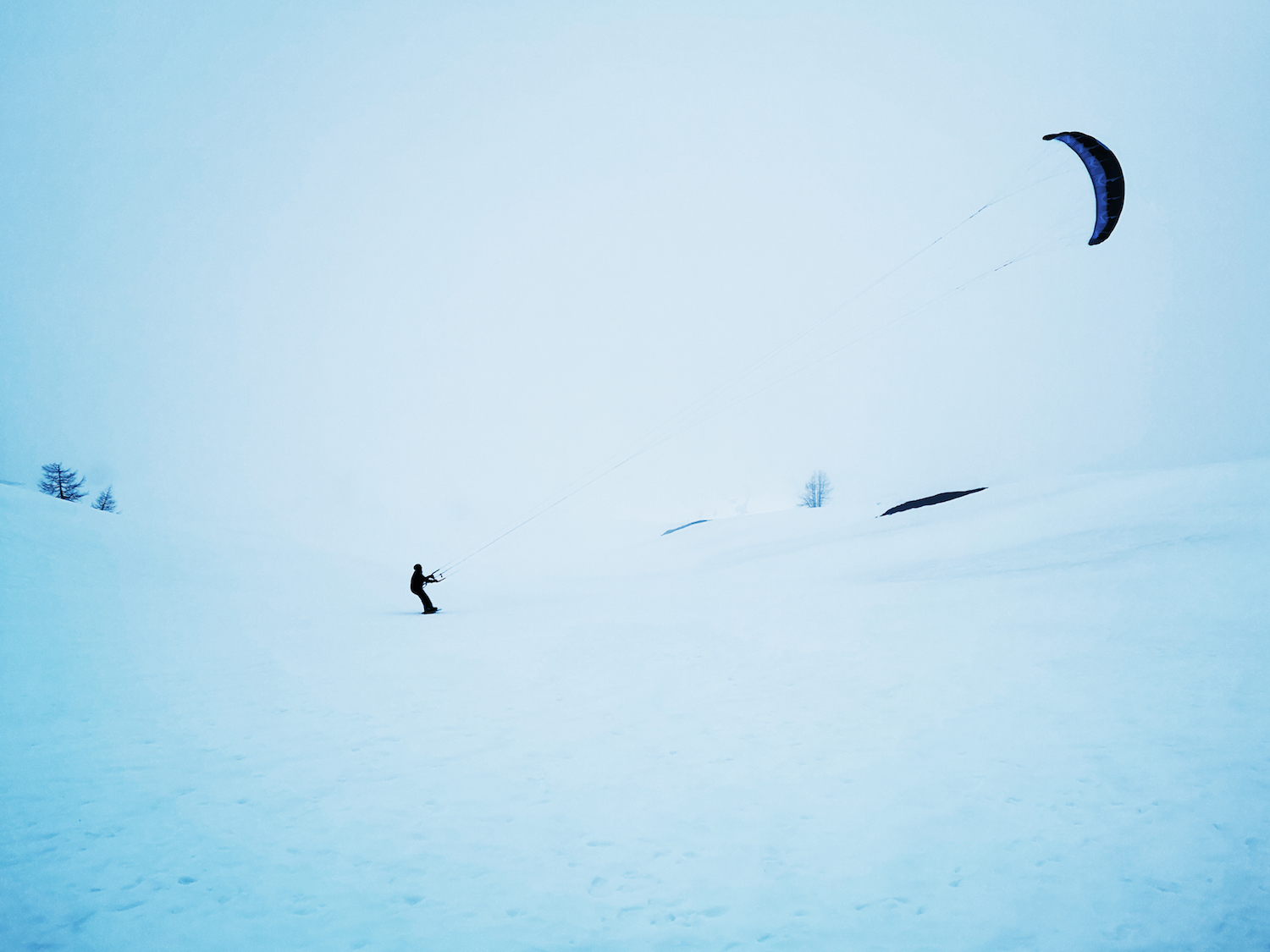 Want to give it a go?

Ready to give snowkiting a go? Here’s what you need to know to plan the above trip for yourself:

Swiss Snowkite School – Whether you’re a beginner wanting to learn to snowkite or an advanced snowkiter looking to climb mountains and navigate backcountry, Pascal and his team at the Swiss Snowkiting School are there to guide you. In addition to the school, Pascal’s centre also operates as a kite shop and a snowkite test centre. Pascal recommends dedicating at least 2-3 days to snowkite lessons but trying to remain as flexible as possible as wind and weather conditions play a big factor on the pass. 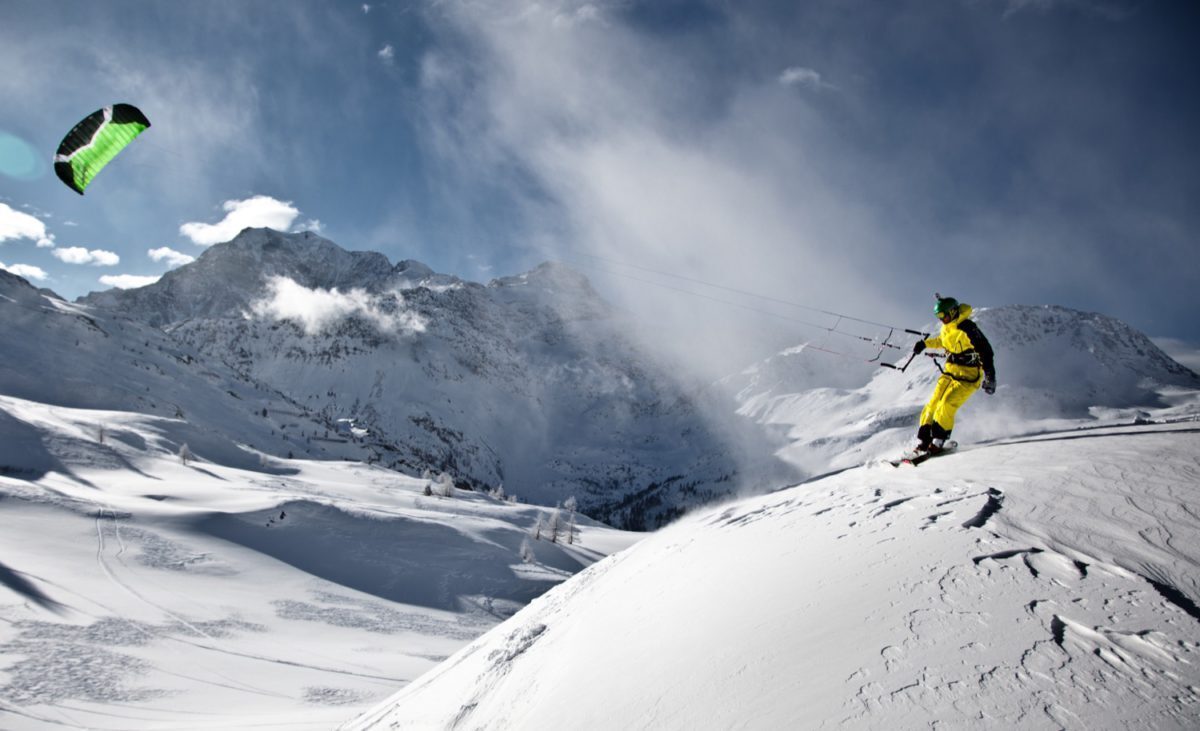 Hotel Ambassador Brig – The Swiss town of Brig is located at the bottom of the Simplon Pass. While there are some isolated hotels located on the pass, Brig is the best place to stay if you want to enjoy some other slopes, explore a bit of the Swiss countryside and do some snowkiting. Decorated in an original French style with a traditional restaurant serving up some amazing monthly specials, the family run Hotel Ambassador Brig offers a cozy home to come back to after a day in the mountains. 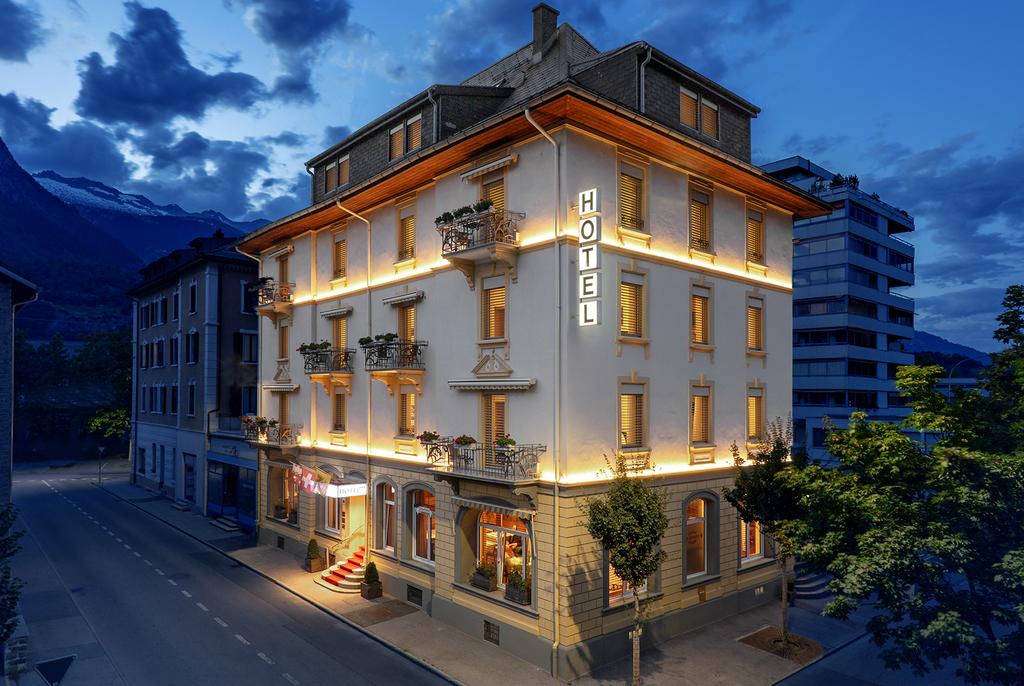 Planet Travel Holidays is one of the UK’s leading adventure sports operators. We operate both Planet Kitesurf Holidays and Planet Ski Holidays so naturally snowkiting is the perfect combination of our skills. We have been there, done that, so know exactly where and when to go and where to stay to get the most out of your trip. In addition, the team at Planet Ski Holidays can also help you arrange flexible lift passes for Switzerland so that you can ski and snowboard this magnificent country, but when the wind allows be able to step away for a spot of snowkiting. 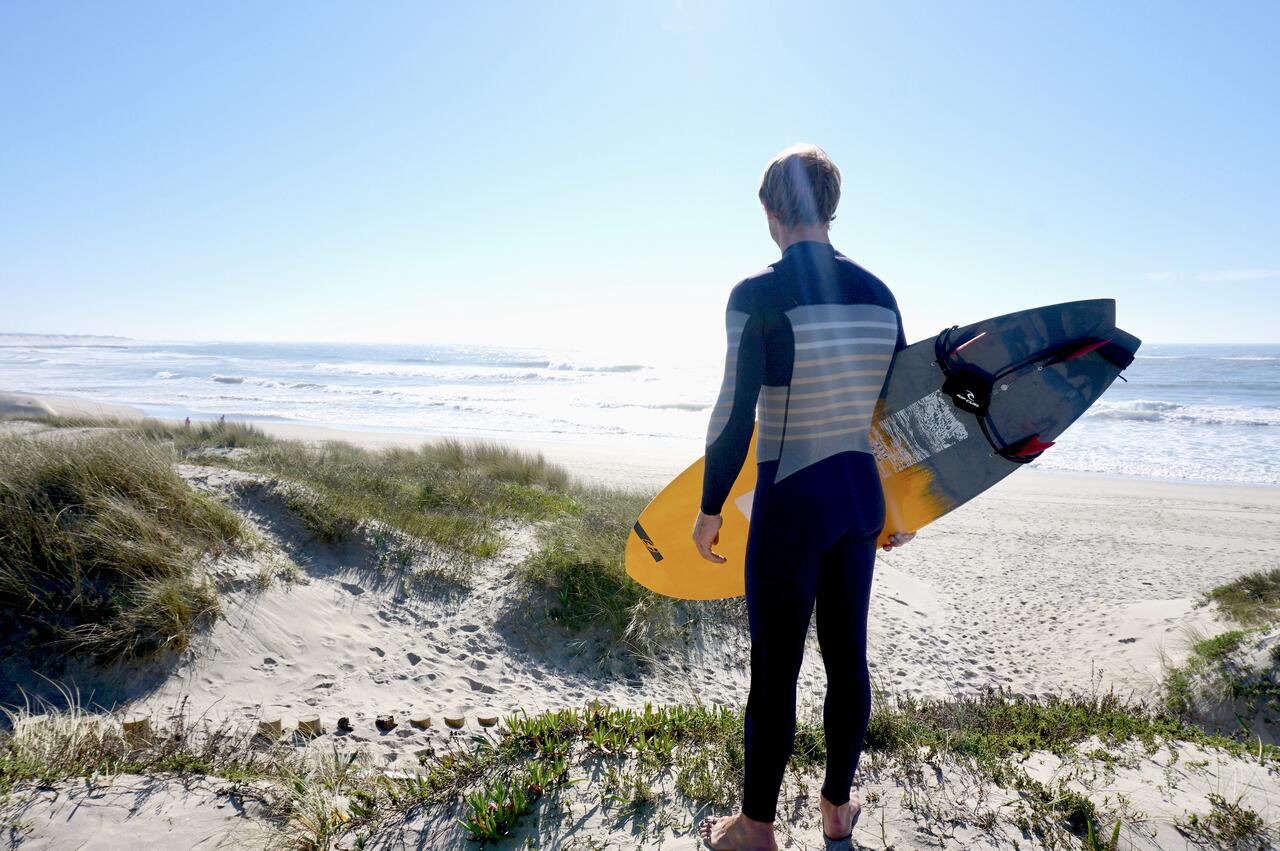 Portugal is a kiter's paradise 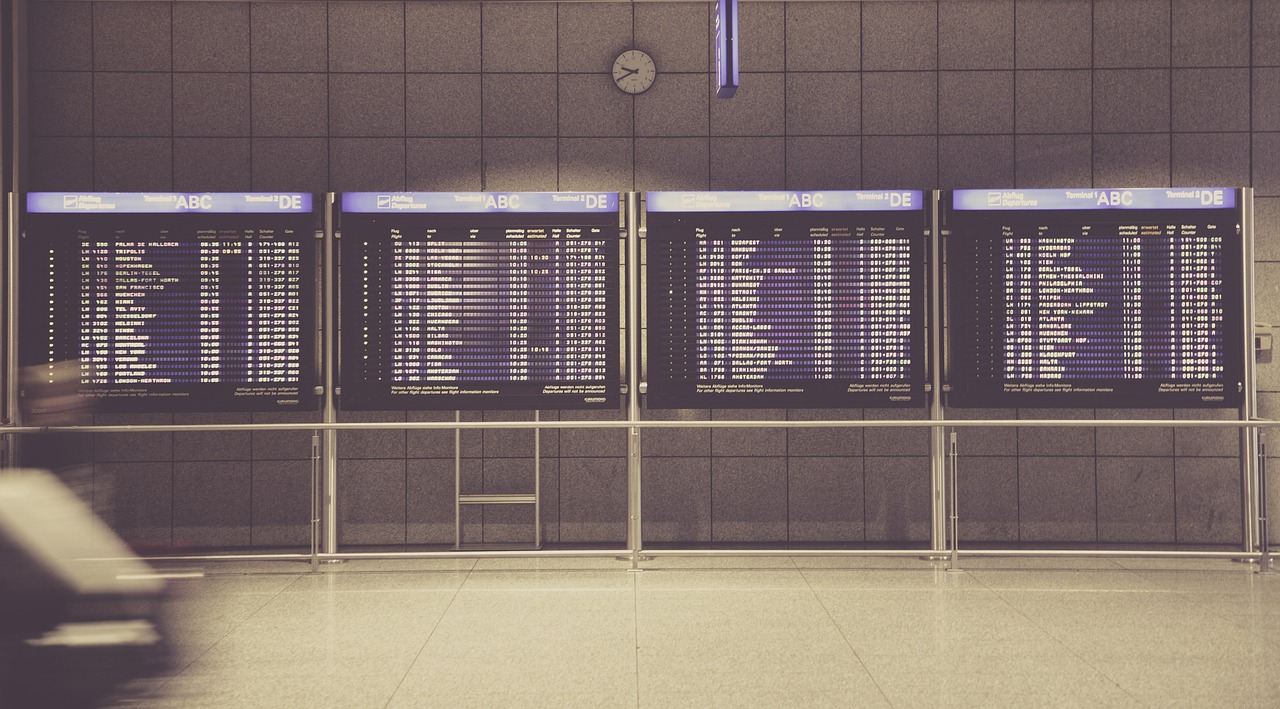 Where is open for travel right now?

Portugal is a kiter’s paradise

Finding Our Adventure in Fuerteventura

The Indian Ocean Is Calling

Reasons why you have to visit Zanzibar

Why you should visit Corralejo, Fuerteventura

Where to kitesurf in the Maldives